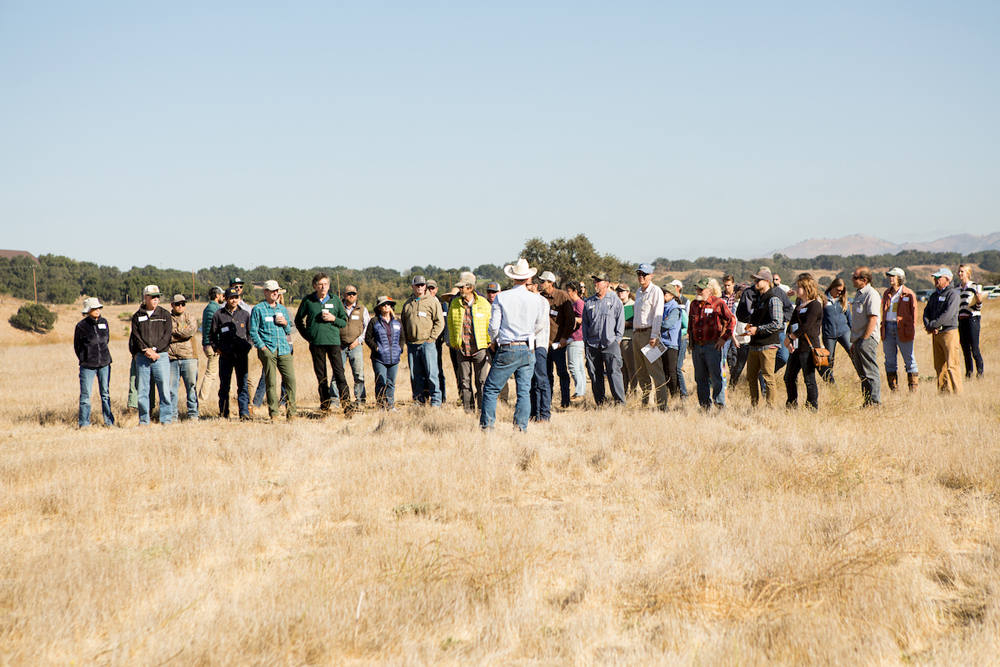 On a recent morning in the Santa Ynez Valley, a crowd of people gathered at the Ted Chamberlin Ranch to discuss soil health and so-called carbon farming.

Matthew Shapero, Livestock and Range Advisor for the UC Cooperative Extension, explained that the grasses surrounding the site had sprouted green last spring and have since died in the heat of summer, becoming what he calls “residual dry matter.” Now the brittle, golden shoots have become a sparse cover for hard-packed soil that’s cracked and dry.

Hospice – Light Up a Life – 300×250
These dry fields pose a fire risk, and even when rain falls on them, much of it evaporates rather than soaking into the soil. But if the contingent of activists and researchers led by the Community Environmental Council and Cachuma Resource Conservation District can get carbon farming to take hold in Santa Barbara County, the hillsides could soon become much greener.

Allegra Roth, Food and Climate Program Associate of the CEC, explained that carbon farming refers to agricultural practices that capture atmospheric carbon and transfer it to the soil. All photosynthesizing plants sequester carbon, so the basic idea behind carbon farming is that the more plant matter being grown on a given plot of land, the more carbon that land harvests from the atmosphere.

As an added benefit, the plants and grasses that naturally die each season become part of a nutrient-rich topsoil that locks in moisture and makes the land more fertile, accelerating future growth, according to the CEC.

There are many techniques for carbon farming, but the one being discussed at the Ted Chamberlin Ranch event was the simple strategy of applying a thin layer of compost to the land. Doing so increases the land’s capacity to hold water, makes pastures more abundant for grazing cattle, and can help mitigate the severity of climate change — all while offering ranchers and farmers economic incentives to help remove excess carbon dioxide from the atmosphere, Roth said.

A compost study by the Cachuma Resource Conservation District concluded that carbon farming can also be a powerful tool for preventing erosion and stabilizing slopes that have been burned in wildfires.

According to Russell Chamberlin, who owns the ranch, the results have been impressive. Two years after applying a quarter-inch layer of compost to several plots on his land, Chamberlin reports having seen a 24-percent increase in grass production, along with hundreds of new oak saplings sprouting naturally in the fields.

What’s more, researchers at the CEC and Cachuma Resource Conservation District claim that the increased productivity generated by that single compost application will continue for the next two to three decades.

tractor in field Click to view larger
In 2016, Ted Chamberlin Ranch became the first ranch in Southern California to implement a large-scale carbon farming plan. (Sarita Relis / Courtesy photo )
The Chamberlin Ranch is now one of 15 sites in California where the impacts of compost application are being studied, according to the CEC.

So far, the results have been promising enough that the California Department of Food and Agriculture recently started the California Healthy Soils Program, which awards grants to farmers and ranchers who implement carbon sequestering practices that include the type of compost application used at the Chamberlin Ranch.

The grant program is funded by the state’s cap-and-trade initiative, from which it received $7.5 million in 2017 alone. Having already supported about ninety projects statewide, in 2019 the department plans to award an additional $15 million.

But for all the benefits that compost-based carbon farming trials have shown, there are still a number of challenges to overcome, event presenters said. The most obvious is scale: for composting practices to have a significant environmental impact, they’ll have to be carried out by ranchers and farmers throughout the state, which will first require widespread education and training, and massive amounts of compost.

The CEC and Cachuma Resource Conservation District have already put forth a list of recommendations for addressing the issues in Santa Barbara County, organizers said.

But amidst the conversations at the Ted Chamberlin Ranch, another issue was looming silently in the background.

The Healthy Soils Program and local carbon farming trials all aim to mitigate the effects of climate change by promoting practices that remove carbon from the atmosphere, thus making farm- and ranchlands more resilient to the fast-changing environmental conditions.

Yet, when introducing the results and benefits of carbon farming at the ranch event, local environmental leaders never once mentioned climate change.

The omission seems to imply there could be an ideological obstacle to getting carbon farming off the ground, not just practical barriers.

Questioned afterward, Roth explained that “we’re trying to keep the conversation going, and it’s unfortunate, but words like ‘climate change’ and ‘global warming’ can sometimes shut it down.”

THANK YOU TO OUR FUNDER