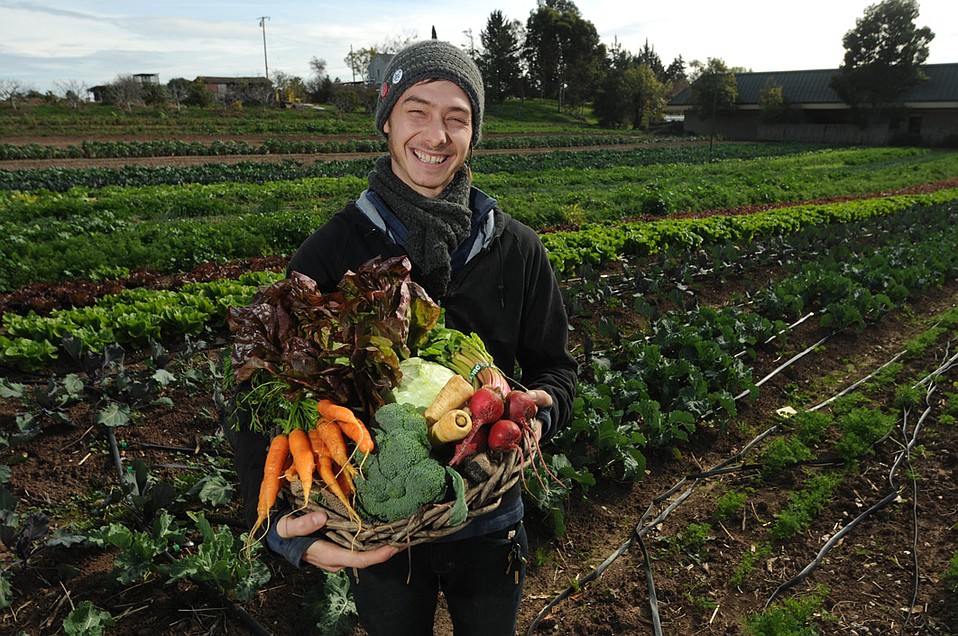 If young farmers and diabetes don’t seem like a natural pairing, just ask Lacey Baldiviez and Ben York. Baldiviez, the director of Goleta’s Fairview Gardens, has teamed up with York, the coordinator for a new project housed in the William Sansum Diabetes Center that prescribes vegetables to diabetes patients.

For Baldiviez, the partnership began as a way to give beginning farmers a leg up in an aging profession. “The median age of farmers is approaching 60,” Baldiviez said. And “it’s not really a career that the children of those farmers are interested in getting involved in.” But while there are young people interested in learning the trade, Baldiviez explained they often struggle to develop the skill set and business acumen required to successfully run a farm — knowledge that has traditionally been passed down through families, not formal training programs.

Now, Fairview Gardens’ Food System Entrepreneurship Academy is working to change that, a few candidates at a time. Beginning this March, two budding farmers will arrive at the Gardens for the program’s maiden voyage, where they’ll begin a six-month intensive introduction to the profession. They’ll learn about soil, tillage, plant pathology, and pest management—“and we haven’t even talked about the business side!” laughed Baldiviez. The apprentices will also learn the ins and outs of leasing and labor laws, insurance, and budgeting, eventually emerging with the beginnings of a formal business plan.

Autumn Snyder, one of the new apprentices, thinks the program is a boon to beginning farmers like her. Snyder currently works as a landscaper, and has everything from indoor installations to a restaurant herb garden in her background, but she says that farming, where everything happens on a large scale, requires an entirely different skill set. “It’s physically demanding, and mentally, when you don’t know what’s going to come next spring or next fall,” she said. “This is honestly the [most] perfect opportunity that I could have asked for, where I’m learning the business behind it and I’m also learning the hands-on.”

For Baldiviez, the trick was to find a way to keep the program local. “98% of the food grown in Santa Barbara is leaving our community, and 98% of the food we eat is coming in from elsewhere,” she said. A partnership with Ben York, who is developing the new Farming for Life program for the William Sansum Diabetes Center, made eminent sense. “I grew up here in Santa Barbara and live less than a mile from Fairview,” York said. “When we decided to utilize local agriculture, that was the first place we contacted.”

Farming for Life is “basically designed to test whether or not increased access to fresh vegetables will have positive outcomes related to diabetes,” he explained. The program will prescribe 12 weeks of free produce to 25 low-income Latino patients currently experiencing food insecurity, along with their families.

If a vegetable prescription—written out on an actual prescription pad with a noticeably plant-y vibe—sounds crazy, think again. Farming for Life is closely modeled on a recent pilot program, the Fresh Food Farmacy, carried out by the Geisinger Health System in Pennsylvania.

Program participants had an average two-point decline in hemoglobin A1c levels, a reliable measure of blood sugar control. Dr. Andrea Feinberg, the program’s medical director, says they’ve seen some significantly higher drops among individual patients—as much as 9.2 points in one case. And the benefits aren’t just health-related. According to Allison Hess, associate vice president of Geisinger Health and Wellness, research suggests that each 1-point drop in hemoglobin A1c levels saves between $8,000 and $12,000. (A recent Gallup report estimates that adult diabetes costs the U.S. economy $245.5 billion in 2015.)

Participants who are given prescriptions for vegetables will pick them up at the Unity Shoppe downtown, “almost like they’re going to an actual pharmacy and fulfilling a prescription,” York said. “The food itself being the medicine is one of the aspects we’re trying to create and promote.”

And both directors have hopes that they’ll be able to expand their programs over time. Baldiviez wants to take on more apprentices, and York has grand plans: Ideally, “we’d like all the healthcare organizations in this town to write food care prescriptions for people who would benefit from them,” he said.

Reposted from the Santa Barbara Independent.