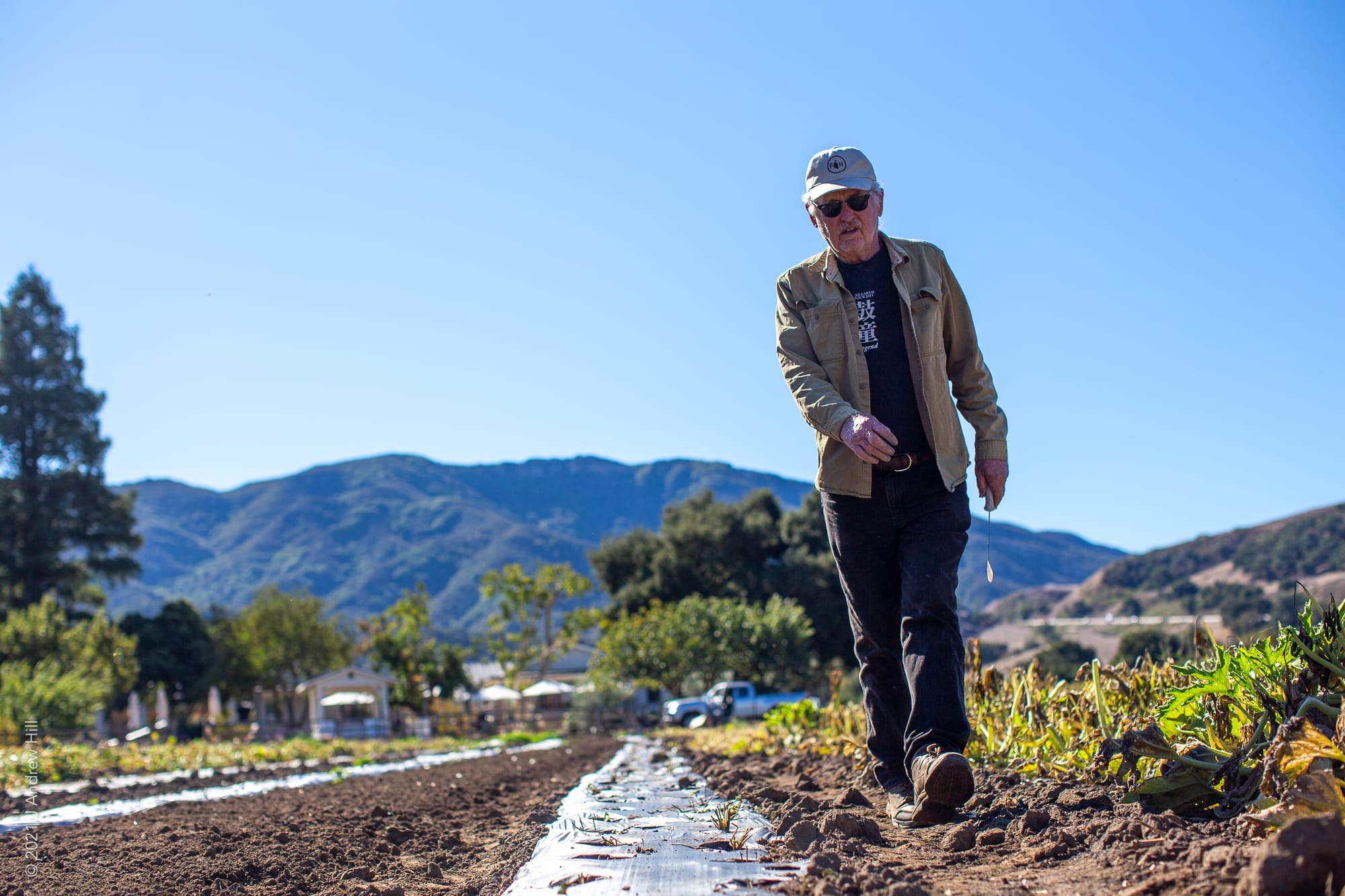 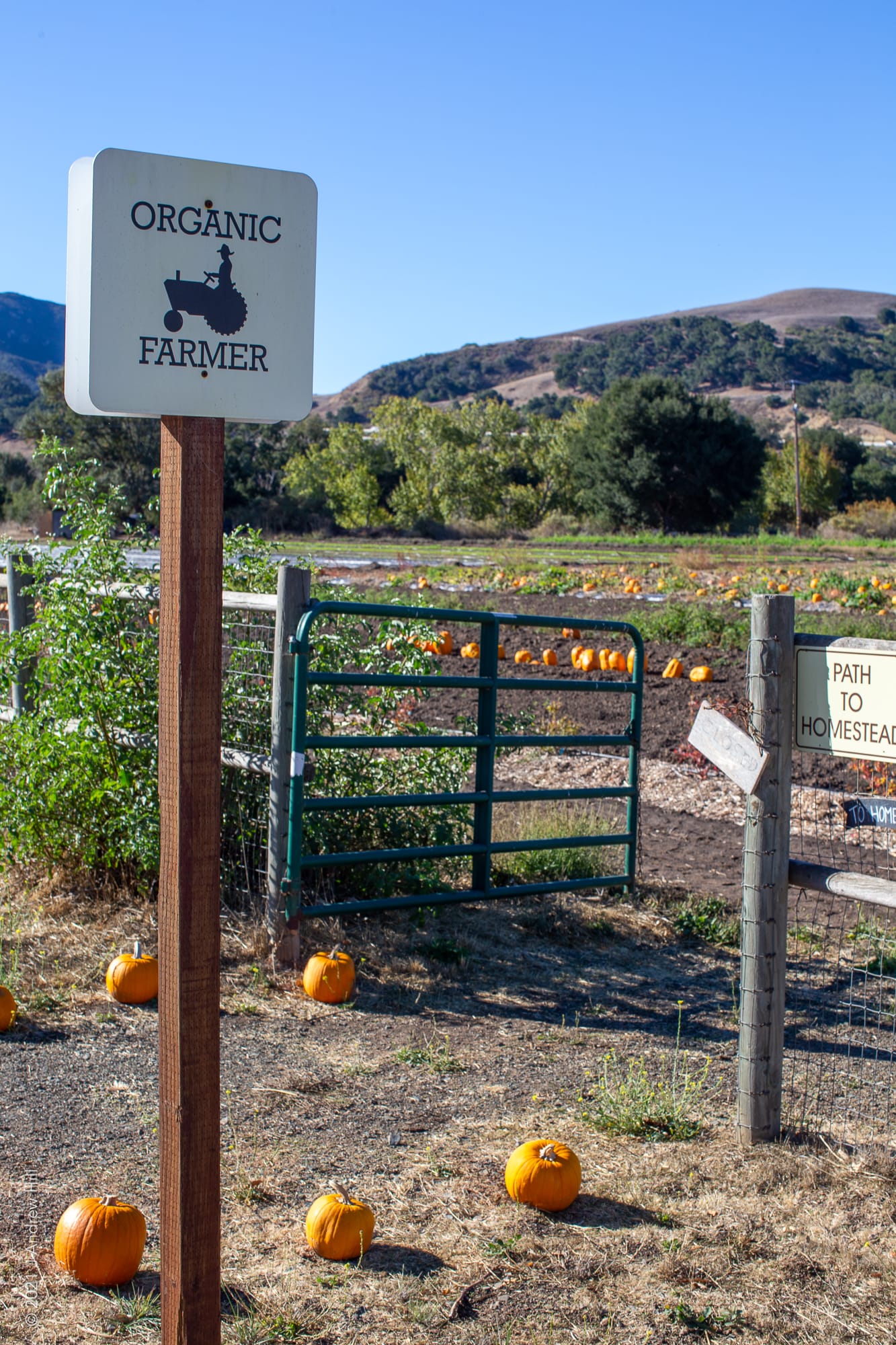 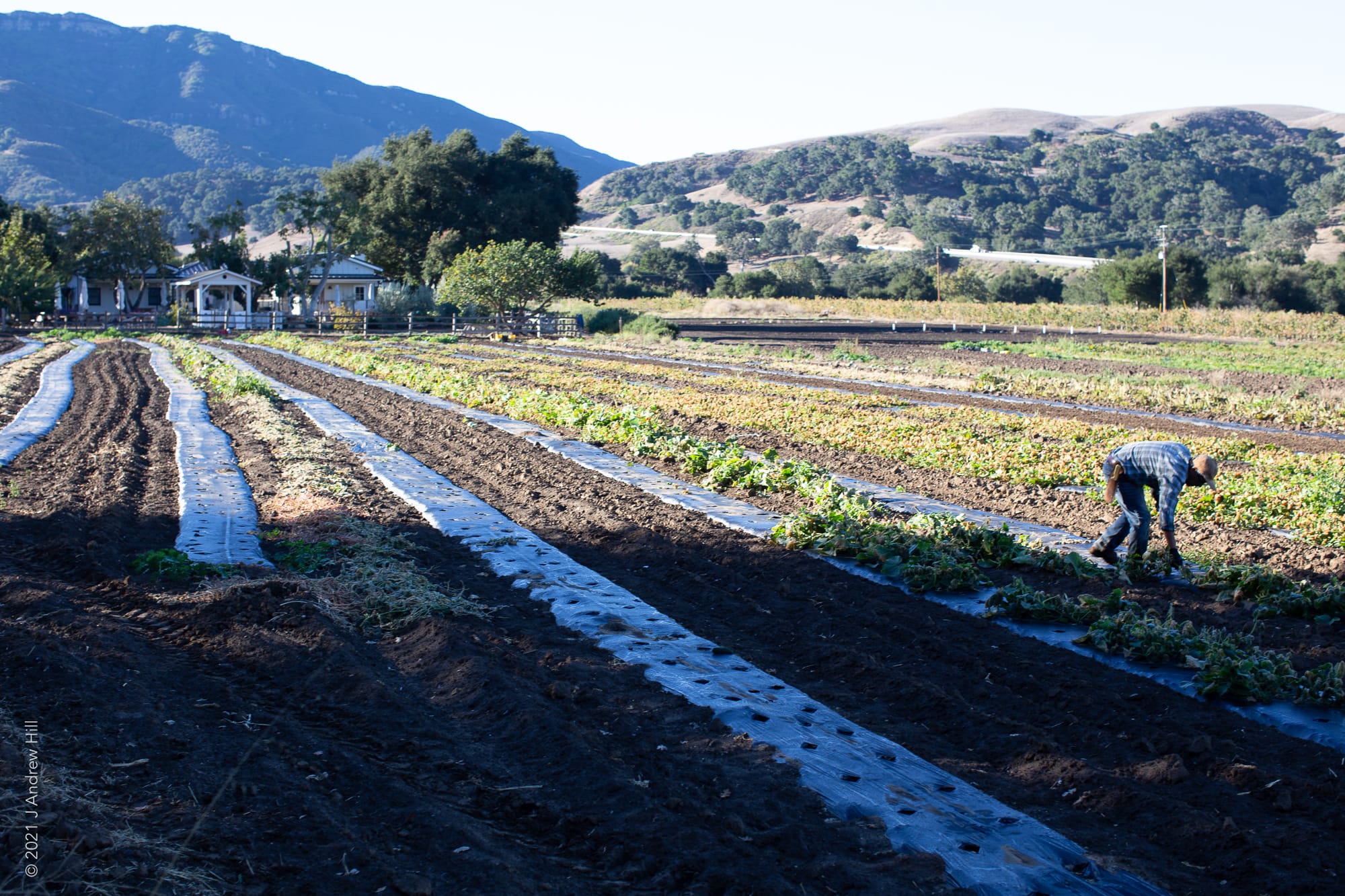 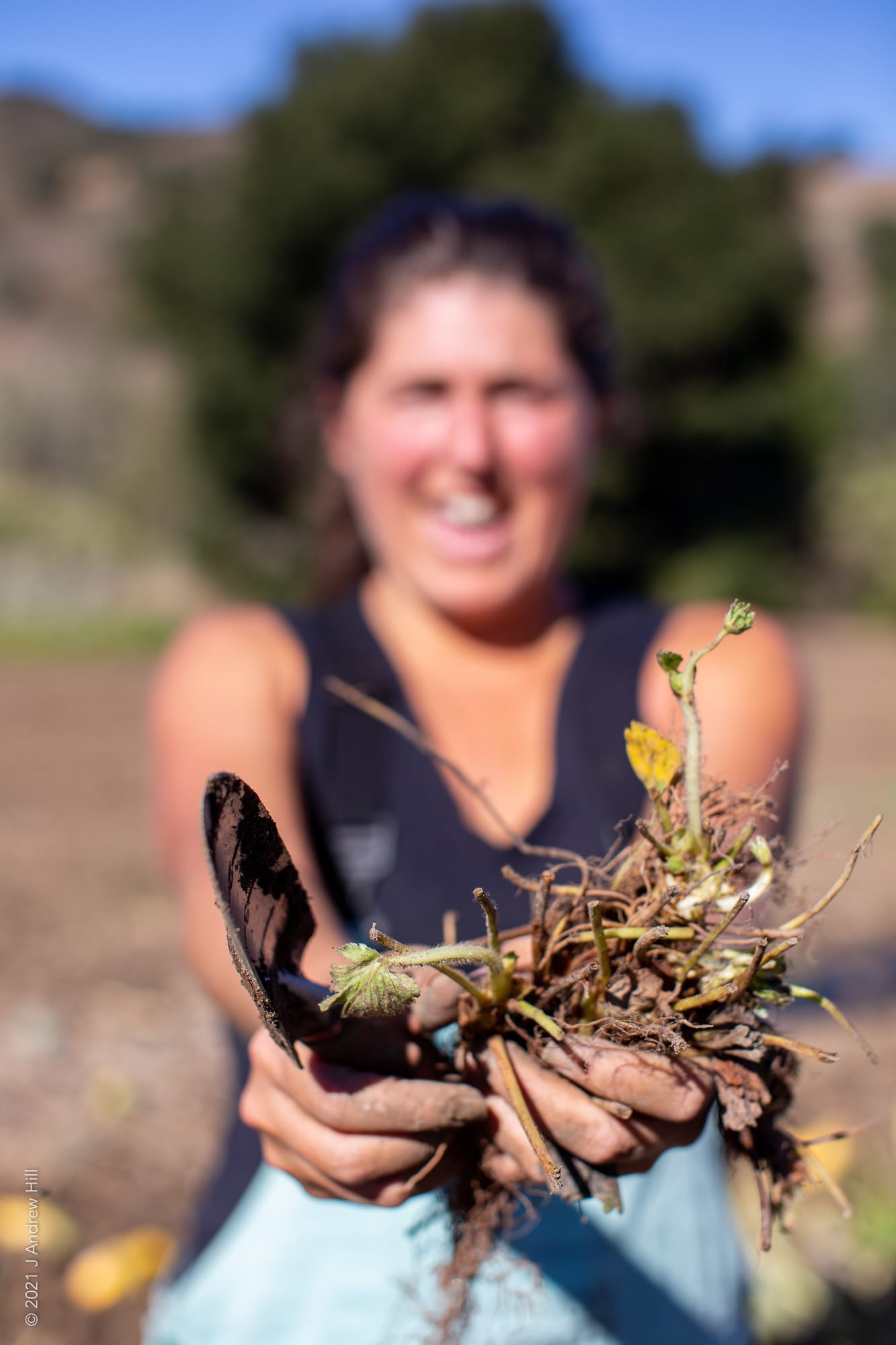 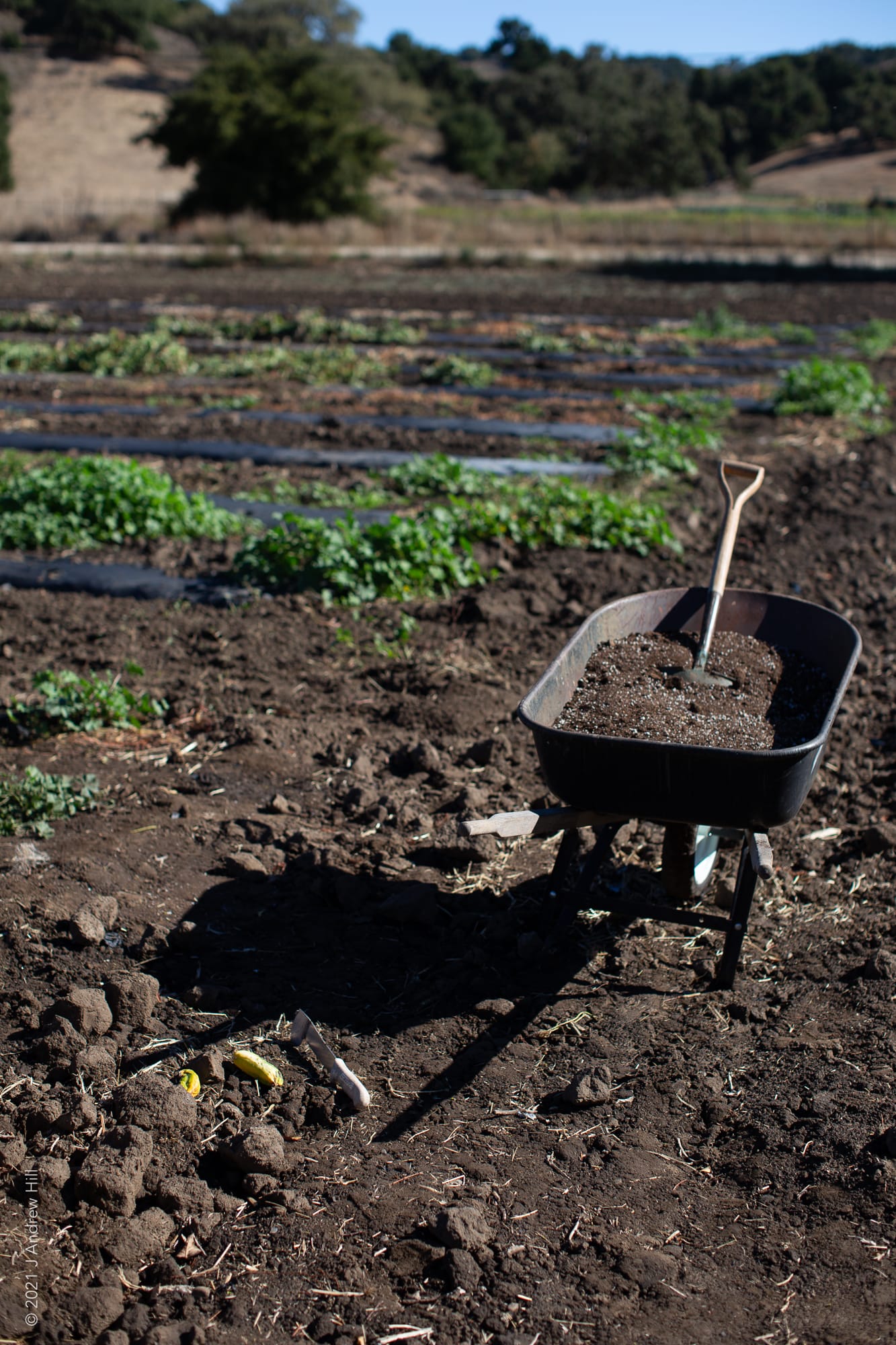 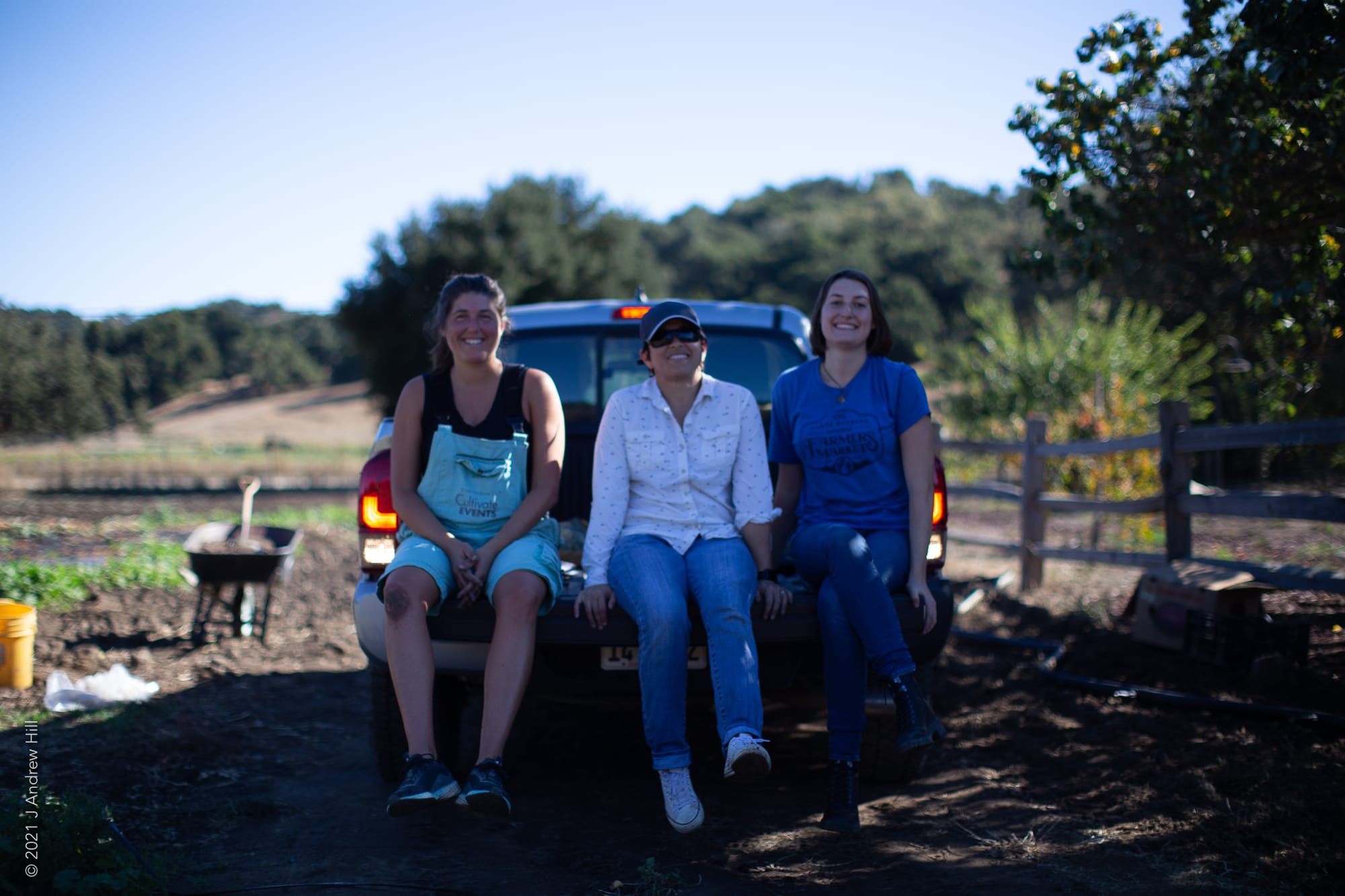 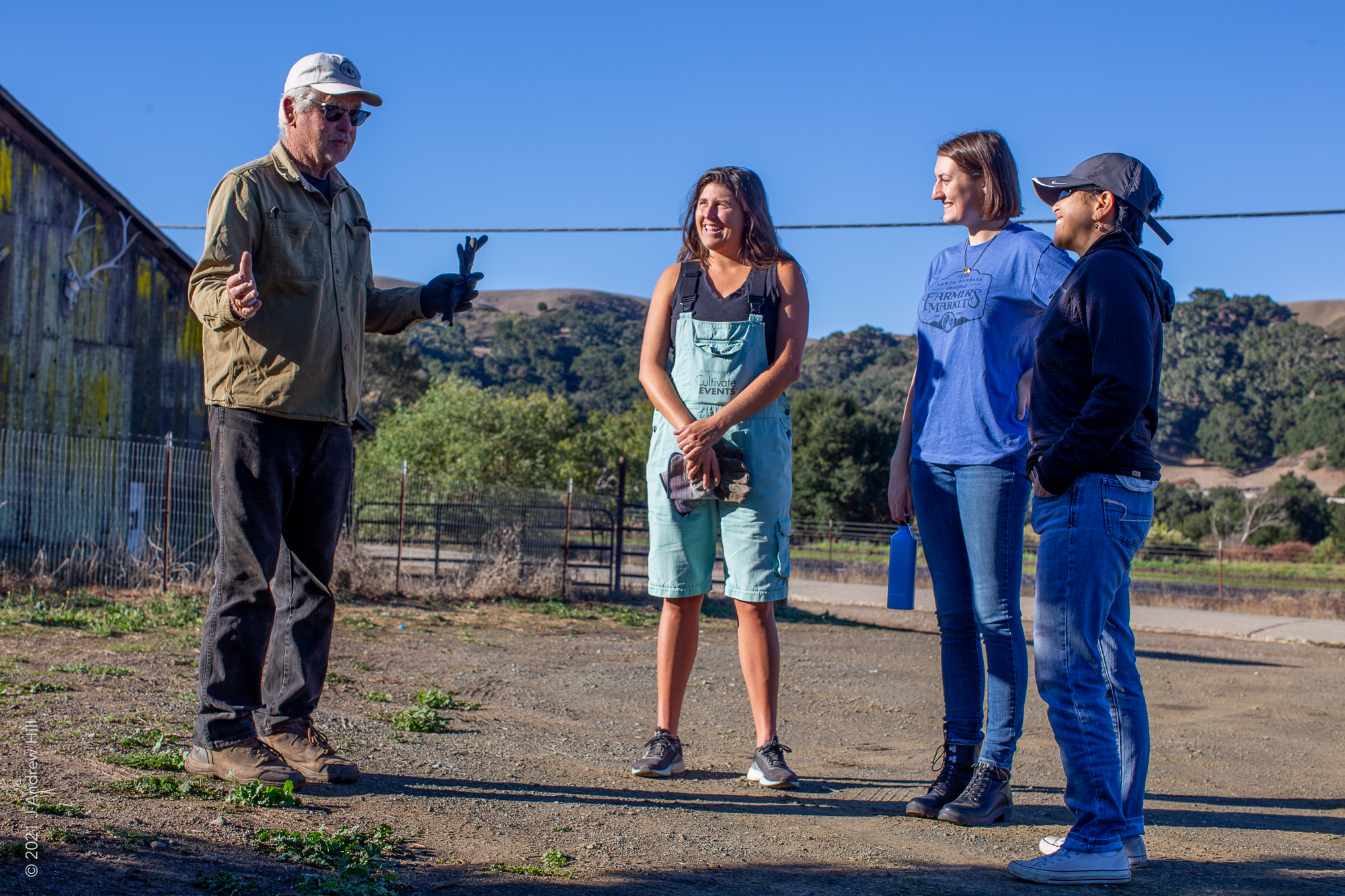 An organicOrganic: Of, relating to, yielding, or involving the use of food produced with the use of feed or fertilizer of plant or animal origin without employment of chemically formulated fertilizers, growth stimulants, antibiotics, or pesticides. farmer for more than 50 years, Tom Shepherd has farmed more than 20 different parcels of land across our region, from Casitas Valley Road in Carpinteria to Santa Rosa Road in Buellton. Like many early organic farmers of the 70s, Tom was inspired to grow food by organic pioneer Alan Chadwick, who lectured widely on the benefits of organic gardening and farming practices. It also helped that he lived across the street from El Mirasol Educational Farm, the first community gardenCommunity Garden: A community garden is a plot of land, usually in urban areas, gardened or cultivated by a group of people individually or collectively. to be planted in Santa Barbara (known today as Alice Keck Park Memorial Garden). These early experiences shaped Tom’s passion for farming and continued dedication to growing food without chemicals.

Tom’s first foray into farming started in a church in the summer of 1973. One Sunday, he stood in front of the congregation at All Saints-by-the-Sea in Montecito and shared that he would like to start a community garden. Before he knew it, the Rector had found a member of the congregation that was willing to donate a small empty lot on the corner of San Leandro Lane and San Ysidro Road. There was only one problem: no one showed up to help plant the garden. Unswayed, Tom did the next best thing – he grabbed a few friends and started a farm. On their one acre, they grew tomatoes, zucchini, melons, and cucumbers, selling to three local food co-operativesCooperative: A farm, business, or other organization which is owned and jointly run by its members who share in the profits or benefits. and enjoying every moment. However, it wasn’t long before the owner of the property realized that the community garden was no longer the vision and rescinded her donation of land. By the end of the summer, they had to move on, but Tom had learned his first and most valuable lesson in farming: find a landowner who shares your vision.

It wasn’t until 1984 that Tom found a landowner who saw farming the same way he did. Located off South Jameson Lane in Montecito, the Hammond Estate was one of the longest leases Tom has had – all because of Mrs. Hammond. “She loved having a farmer on her property,” said Tom. “She truly understood farming and all that comes with it – the vibrant rows of crops and delicious food but also the dust, noise, farmworkers coming and going, and other issues that exist on farms.” Farming this property was a dream come true. The coastal breeze created the perfect climate for lettuce so Tom got to work cultivating a mix of greens that only a handful of farmers nationwide were growing at the time. Within a few years, “Shepherd Salad” was on restaurant menus across the state, putting Shepherd Farms on the map and providing a product that would sustain the farm for decades to come. Tom would have stayed at the Hammond Estate longer, but sadly, when Mrs. Hammond passed away, her children decided to sell the property and Tom had to move once again. Unfortunately, this story is quite common across Santa Barbara County and the country, where we see farm and ranch land being sold for development instead of preserved as agricultural land.

Tom has farmed quite a few more plots of land since he left the Hammond Estate in 1992, but after all these years as a nomad farmer, he’s finally found a permanent home at Folded Hills Farmstead. What makes this 18-acre plot so prized? Aside from the fertile soil and ideal climate of the Gaviota Coast, it is (unsurprisingly) a shared vision with the landowner that sealed the deal.

Andrew Busch and Tom Shepherd have a lot in common. They both care deeply about agriculture, preserving the land, and putting in the hard work necessary to create something special. “Andy gets farming,” explained Tom, “and he trusts me to do what’s best for the land – two qualities that are almost impossible to find in agricultural landowners these days.” Like Tom, Andy is on the land every day, involved in the operations of the farm, ranch, and vineyard that make up Folded Hills Farmstead. For Tom and many other regional farmers who lease the land they grow food on, trusting and having a good relationship with a landowner who understands the complexities of food production is extremely rare. When you’re able to cultivate this kind of relationship between farmer and landowner, you don’t let go.

Depending on the season, the farm produces a variety of staples, including Chandler strawberries, spinach, broccoli, cauliflower, snap peas, carrots, hard winter squash, melons, herbs, and salad mix. One of Tom’s signature offerings is Herbs de Provence, a proprietary blend of 12 herbs including lavender, thyme, and rosemary that he dries and crushes by hand each Friday for the next day’s farmers’ market. Consumers line up at his market stand to purchase this favored mix by the scoopful, discussing how and in what recipe they plan to use it that week. Throughout his many decades of farming, Tom has sold his produce to restaurants, grocery stores, and at farmers markets, but in the last six years, the latter has become his focus. “Being at the market, talking with customers, and engaging with the people I grow food for is my favorite thing about farming,” said Tom.

Tom’s greatest legacy are his children, who both grew up to be farmers. His daughter Katie and her husband Jason have built a successful organic farm stand, farm box and grocery delivery business, home-compost program, and soon-to-be certified organic restaurant in Carpinteria. “I was raised in my father’s fields, at his farmers’ market stands, and at the Farm Cart,” said Katie. “Jason and I are raising our children in the same way – a commitment to organics and a passion for farming.” Tom’s son Colin also grew up on the farm and at the farmers’ markets with his father, gleaning everything he could about organic practices. Now, he applies that knowledge as an Integrated Pest Manager for a cannabis operation in Illinois where he ensures that insects and disease problems are taken care of with as little input as necessary – and always organically.

A father can’t be much prouder than when his kids carry on the critical food system work he has stewarded for more than five decades. But he knows the future of farming is a challenging road that shouldn’t be traversed alone. “Buying land – and paying for it solely with the production from the farm – is extremely challenging,” said Tom. “For the sake of next generation farmers, we must marry those who have the financial backing and vision for agriculture with those who have the passion and dedication to do the work.”

Find Tom at the Santa Barbara Farmers Market on Saturdays and Tuesdays or stop by the Folded Hills Farmstead farm stand to purchase his organic produce – if you see him in the field, walk on out to say hello. 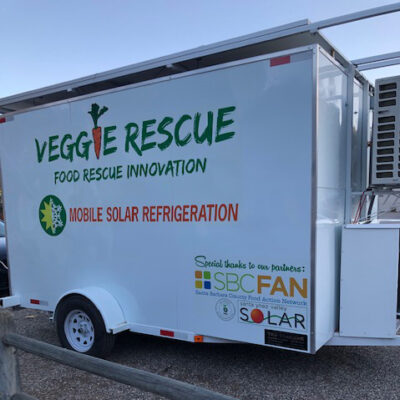 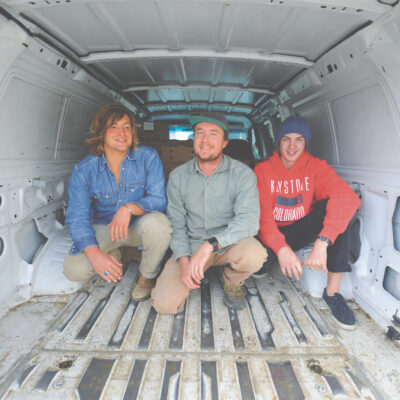 SBCFAN Members receive our seasonal member newsletter and occasional alerts about food system resources, opportunities, and advocacy. Membership is free and the only prerequisite is that you be an active participant in the Santa Barbara County food system. If you eat, grow, gather, buy, sell, ship, process, raise, fish, and/or engage with food as it moves from farm to table, we hope you’ll become an SBCFAN member.

In addition to receiving our email newsletters, the Network provides members with an online “hub” to further connect, align, and activate with other food system “actors” so that together, we can build a more resilient food system.

Become a Member
What Badges Have People Earned?

A Food Action Network for Everyone

A successful Network is a community where everyone can participate, contribute, and benefit from connecting with others. That’s why we are setting a table with space for everyone. We welcome you to grab a seat and join the conversation so that together, we can build a more resilient food system.

That being said, the Santa Barbara County Food Action Network is a work in progress. We have much to learn, including how we can create a hub for our countywide food system that over time will reflect all of you. We are committed to taking a stepped approach to inclusivity, diversity, and accessibility as we develop our language and communications, outreach, and leadership.

Thank you in advance for your patience and understanding while we continue to evolve.

We are designing our website and member portal to be multicultural and multilingual. But we still have a lot of work to do.

As we work toward completely bilingual content, we will use a combination of human and machine translation. We are committed to providing inclusive, diverse, and equitable access – and we thank you in advance for your patience and understanding while we evolve. For now, please pardon our awkward Spanish.