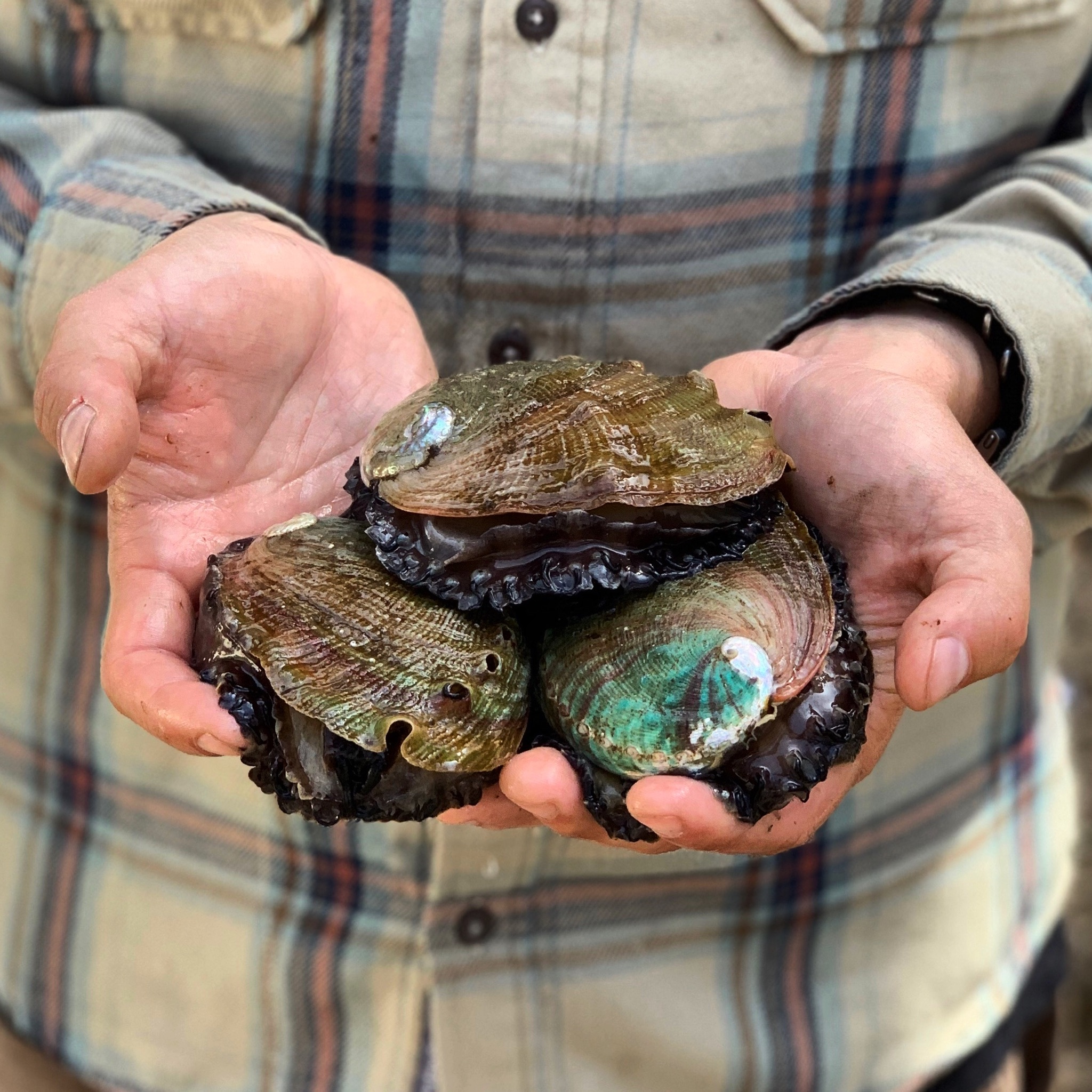 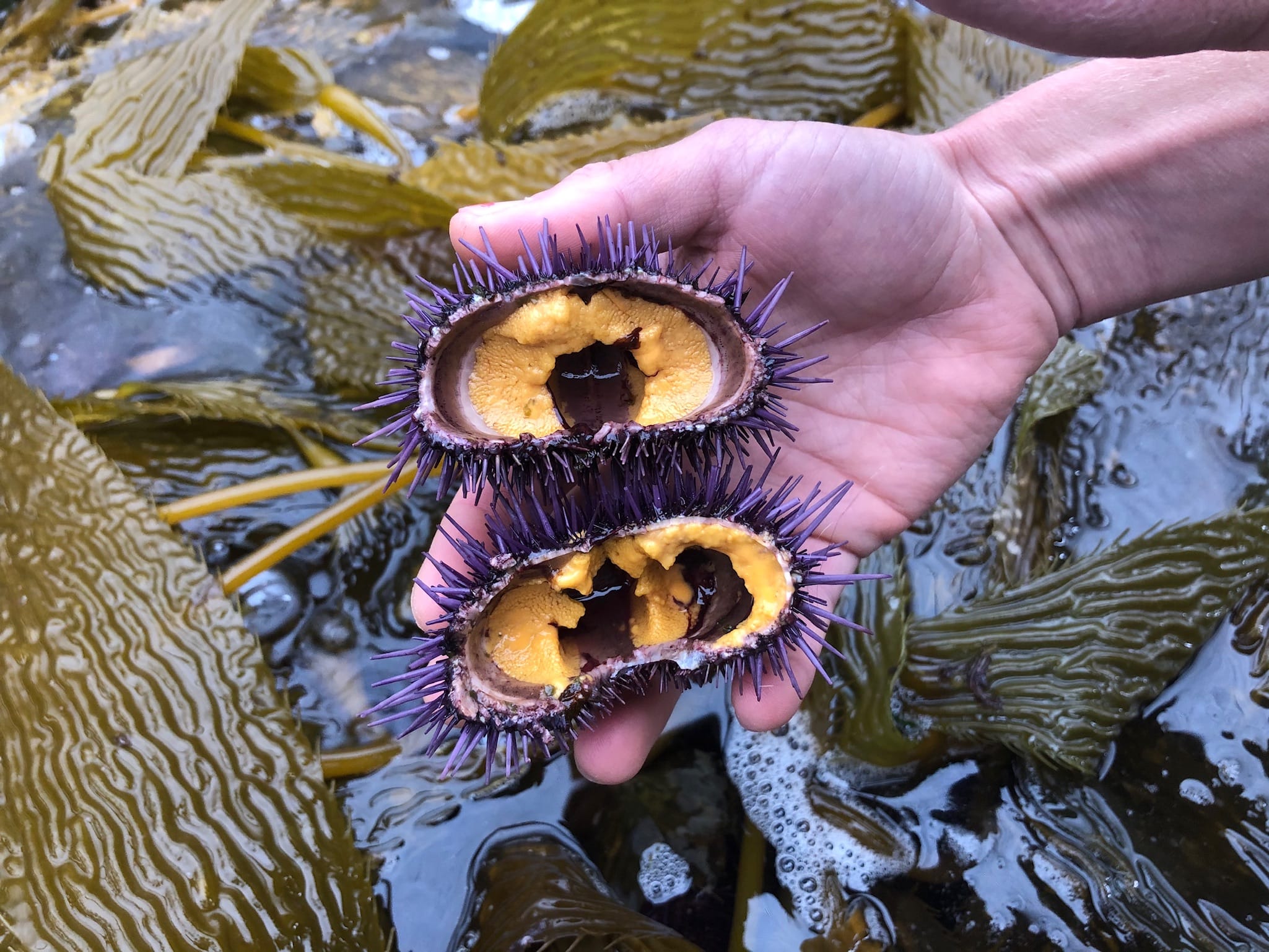 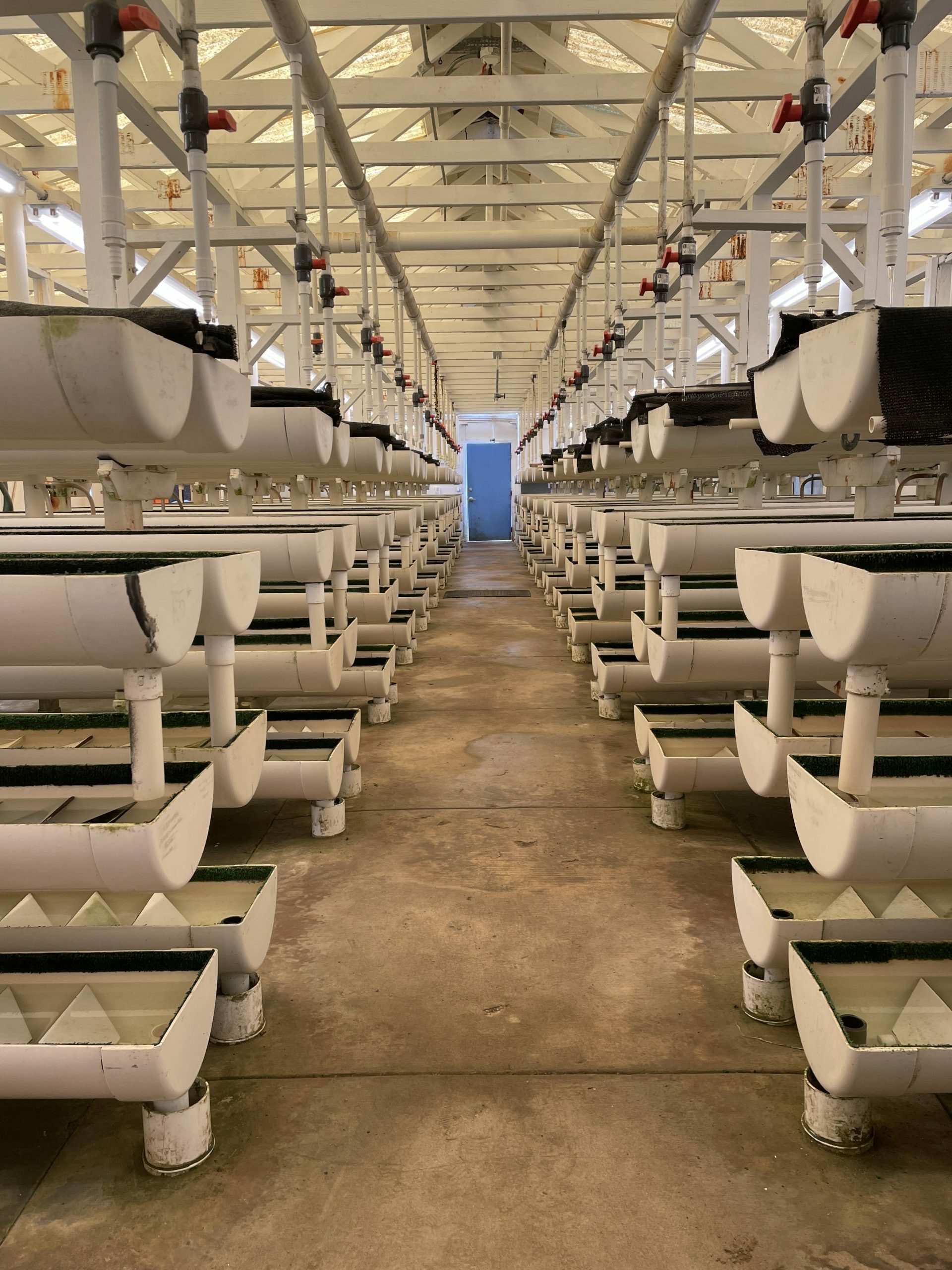 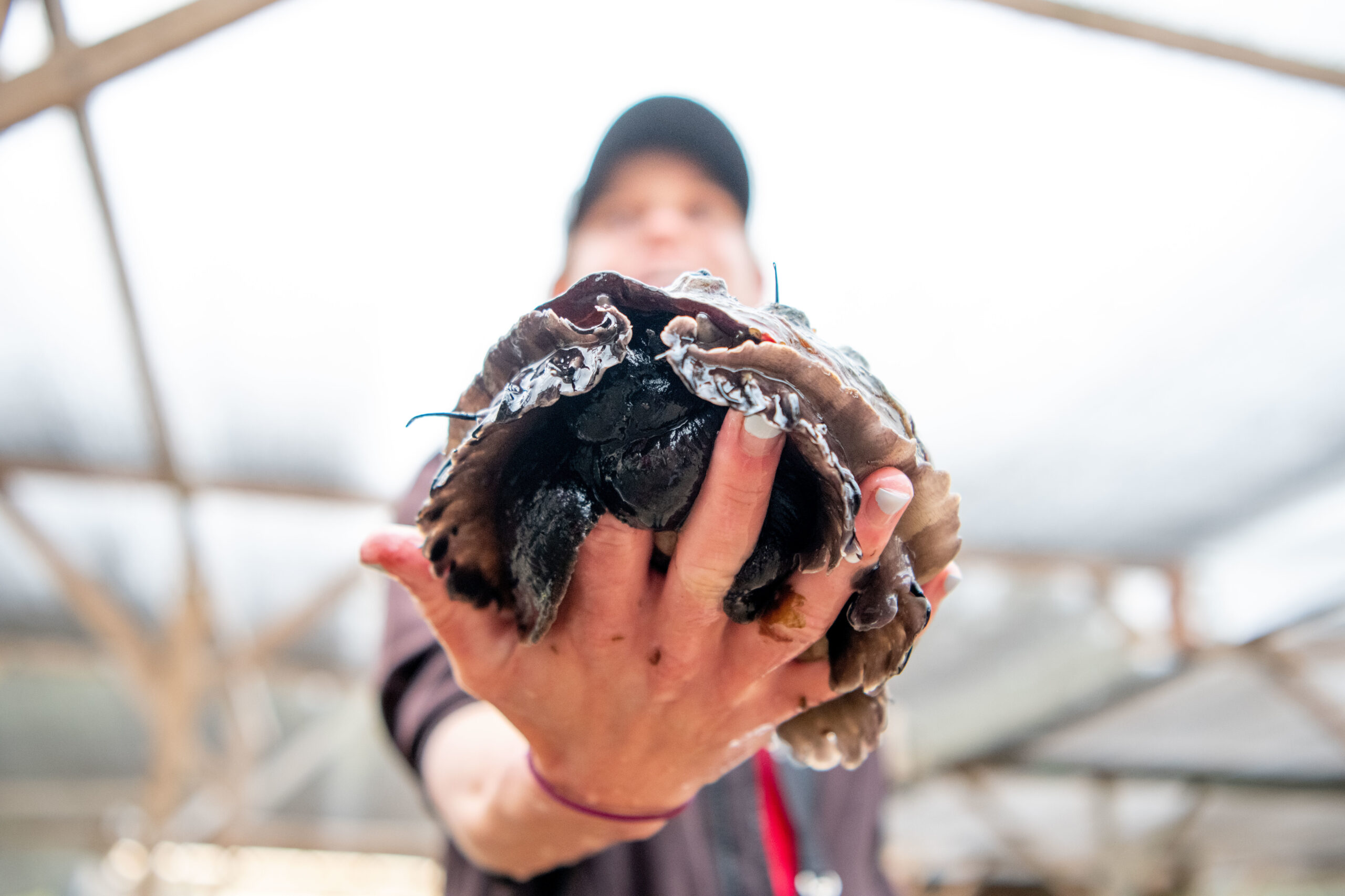 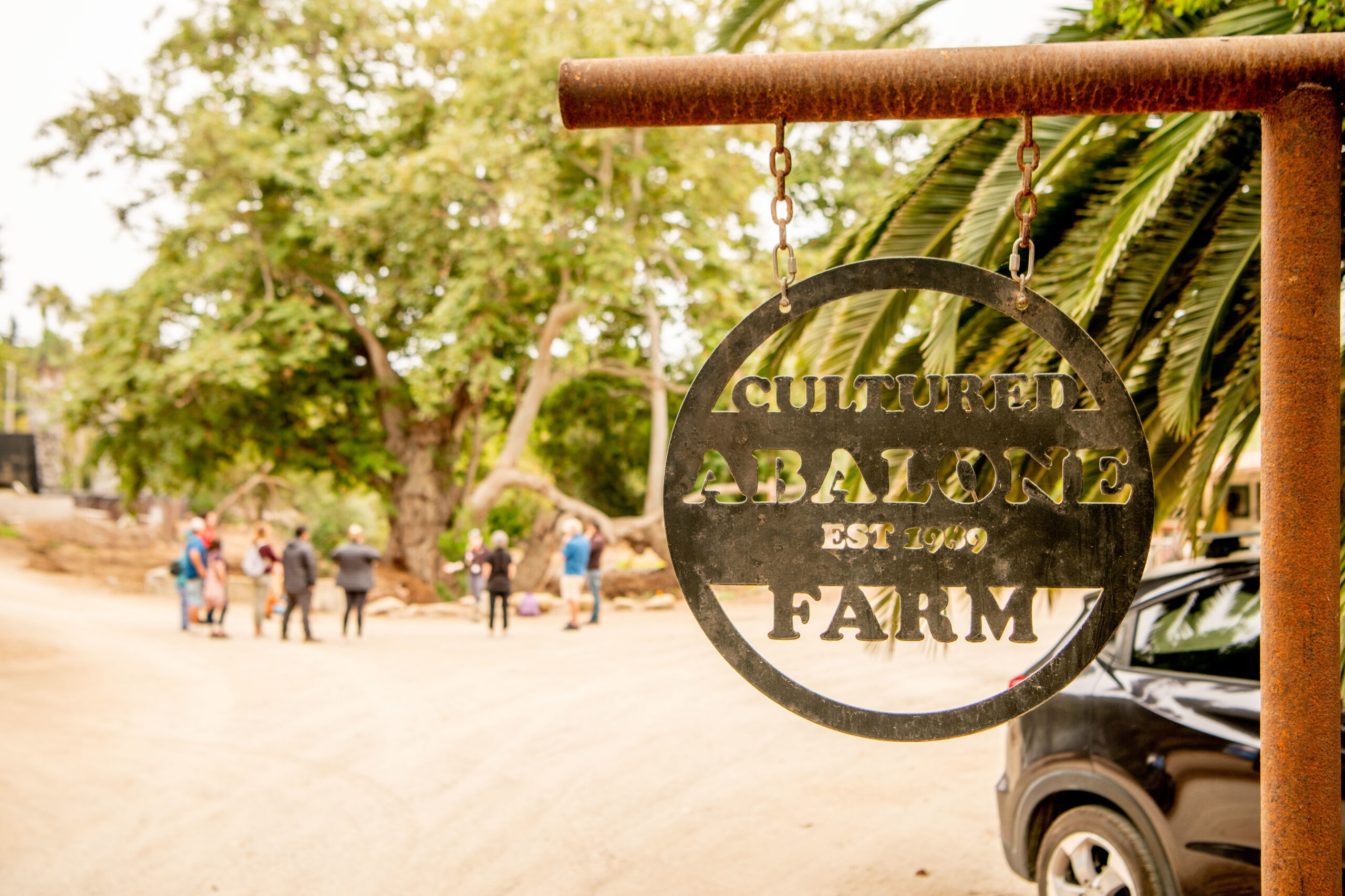 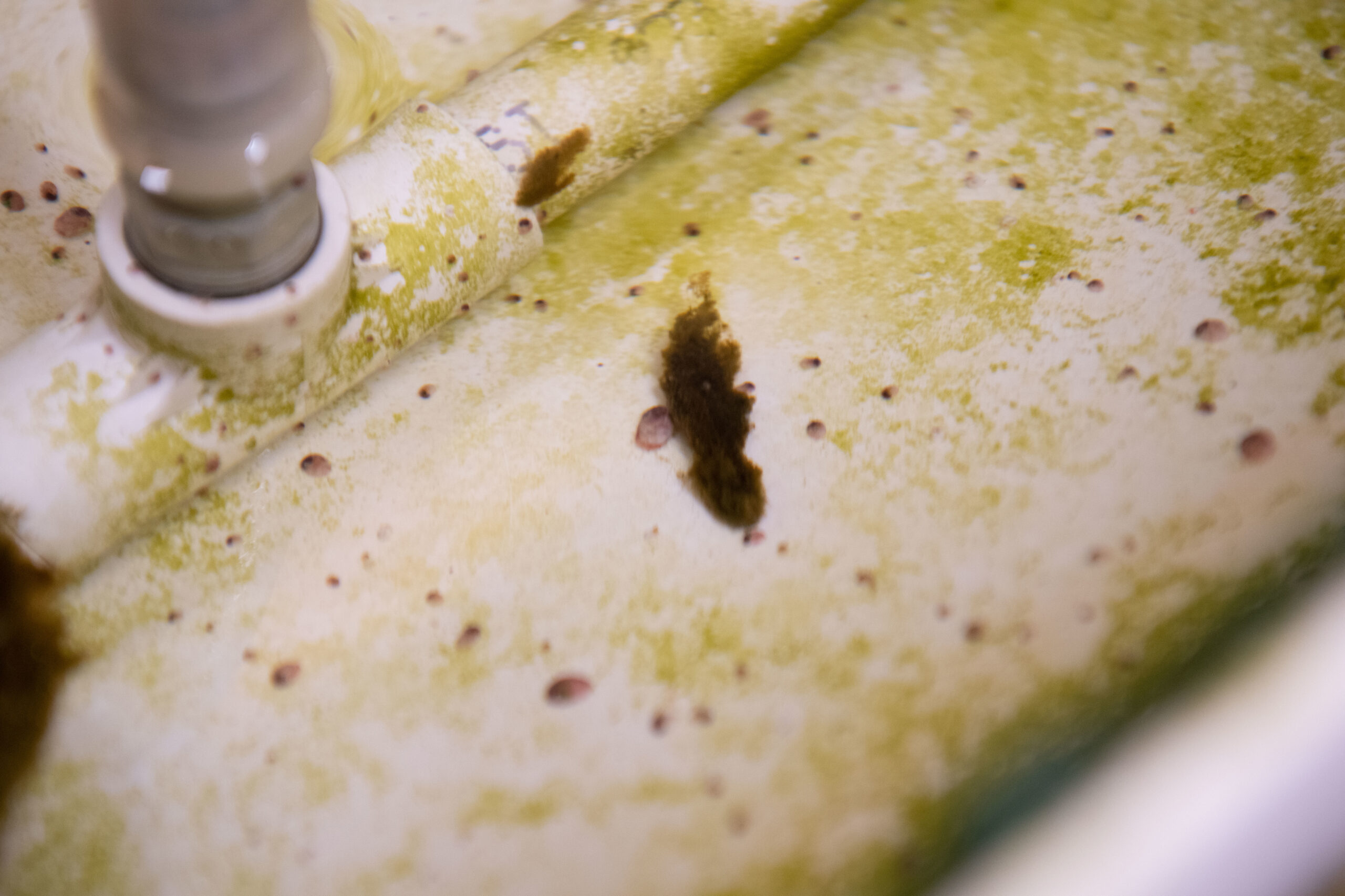 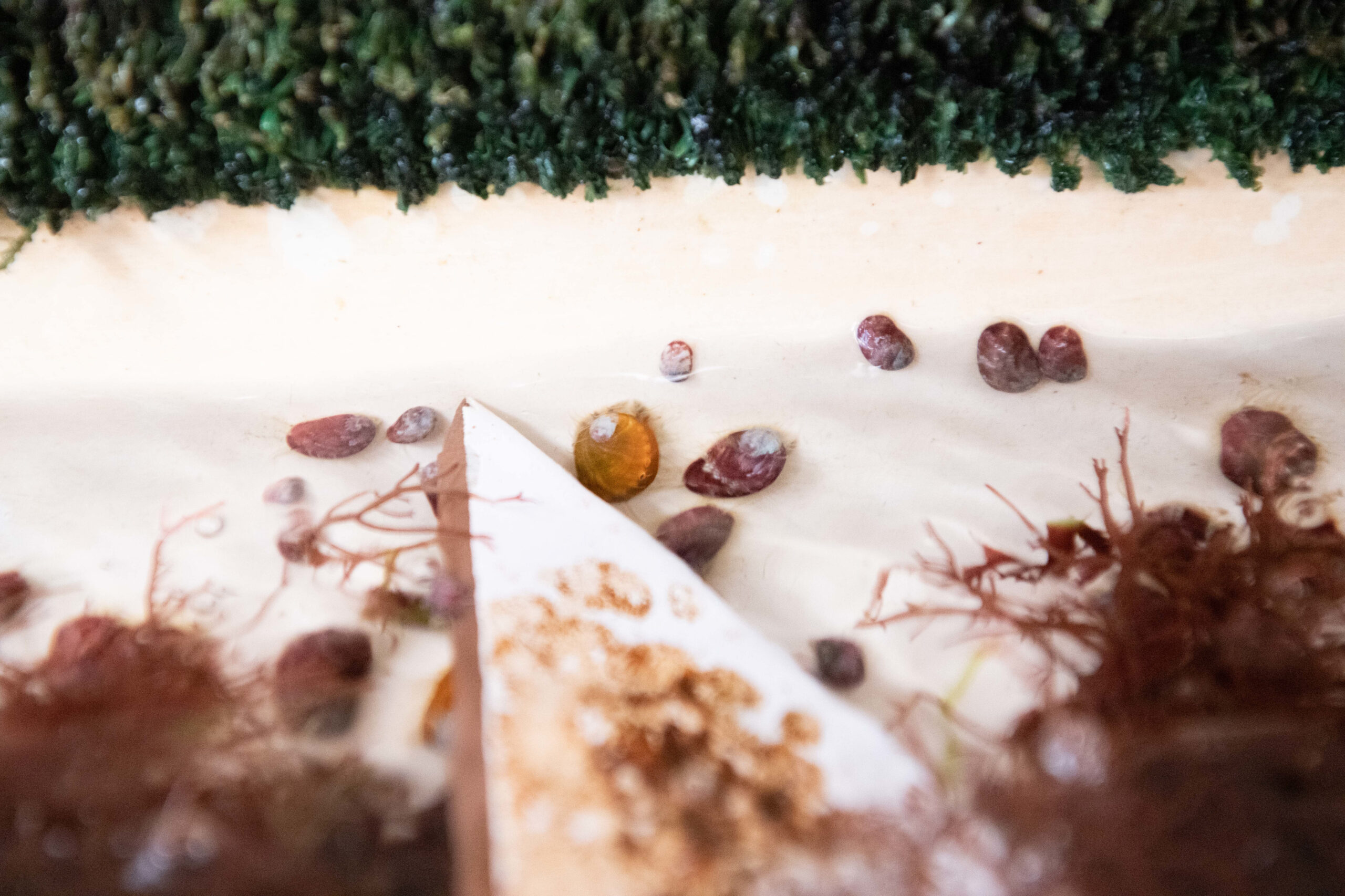 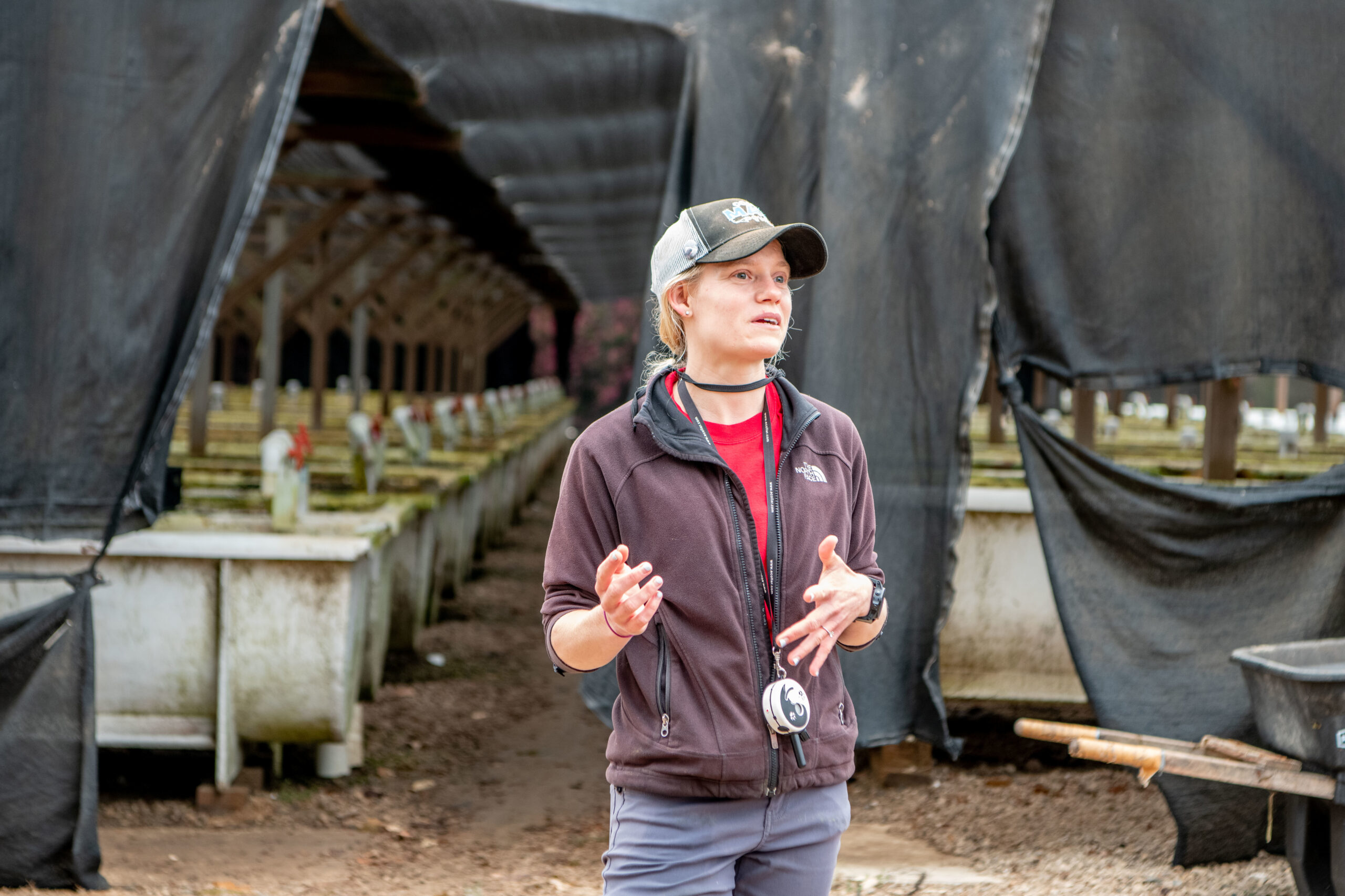 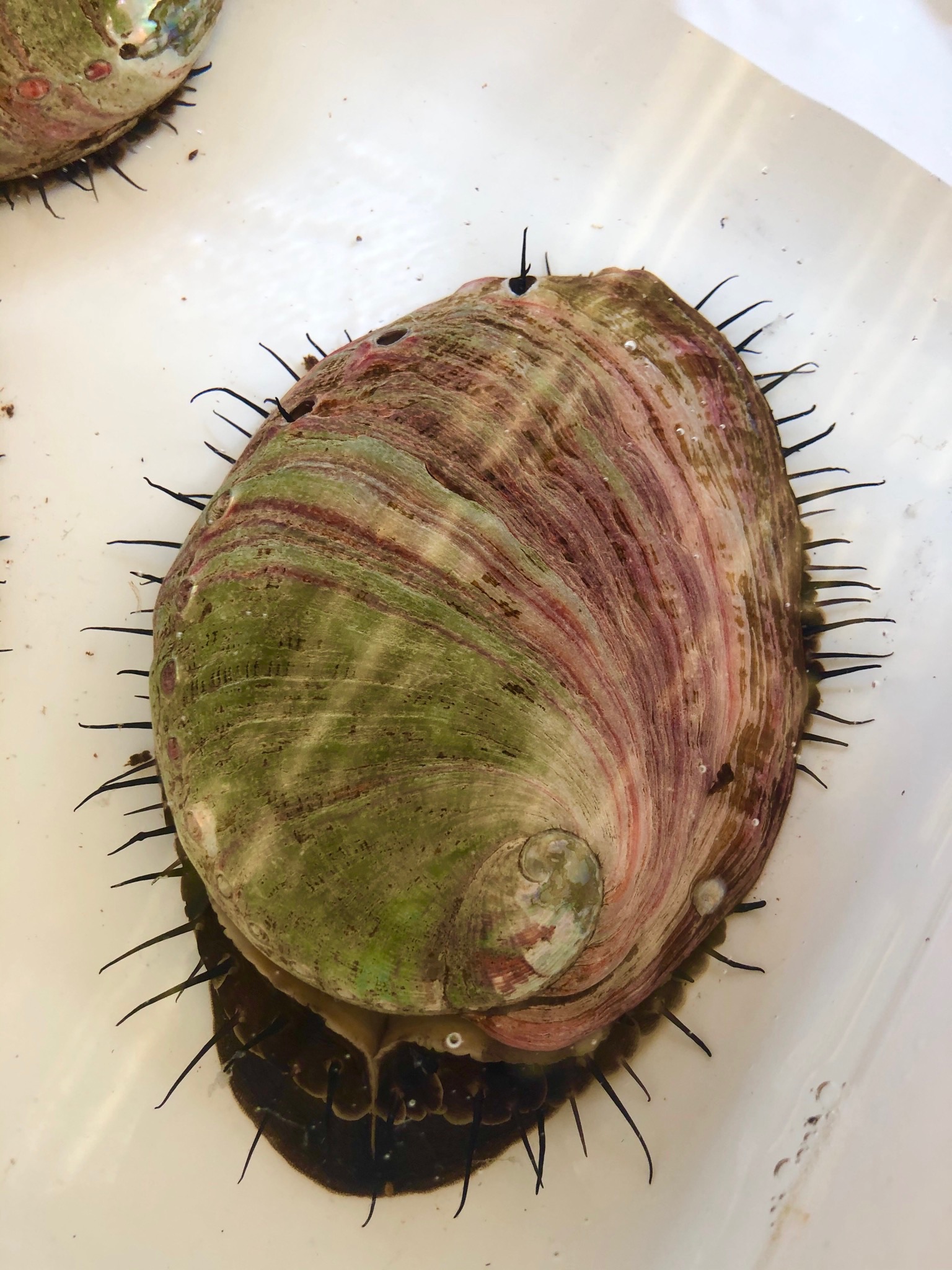 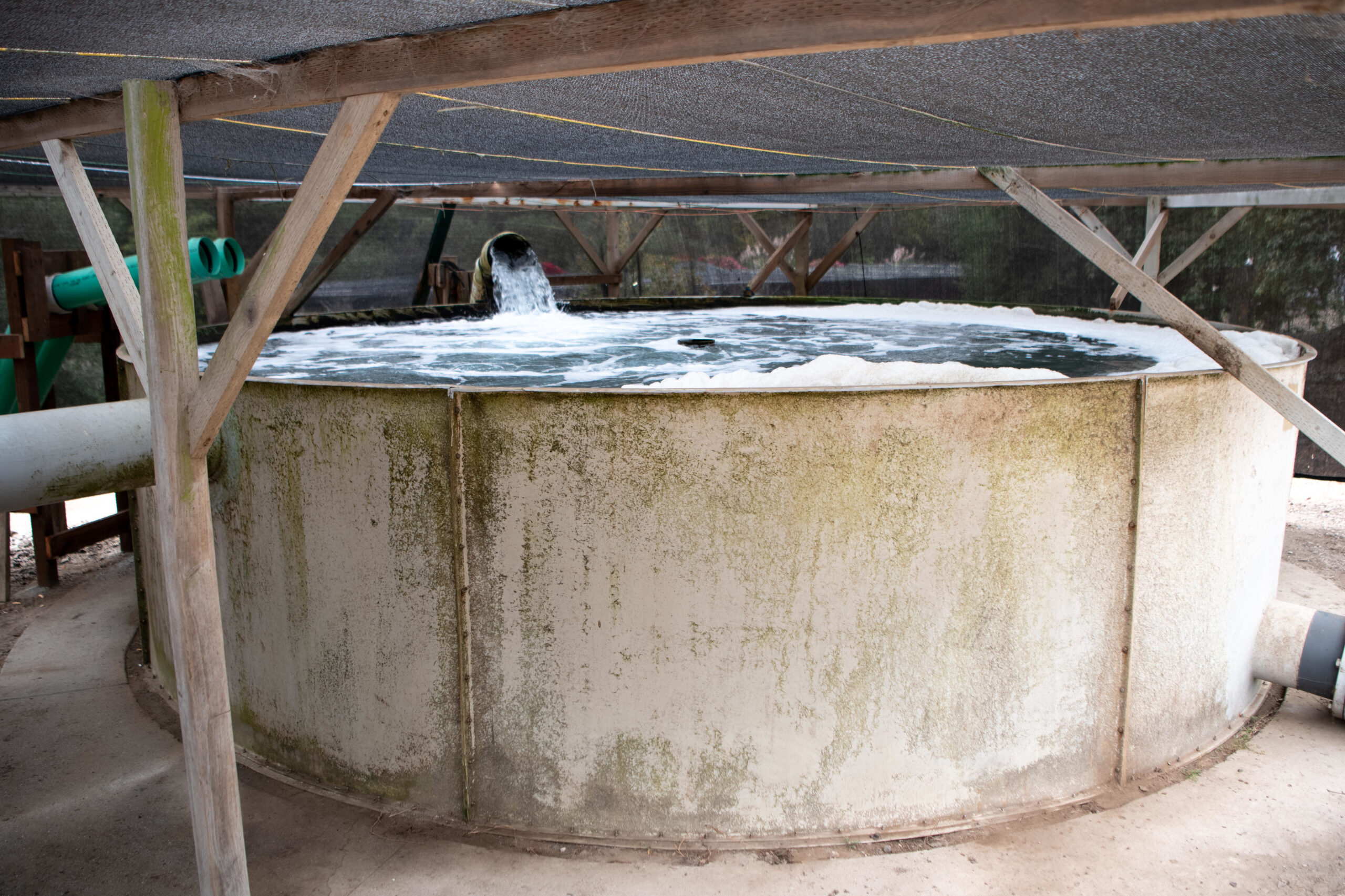 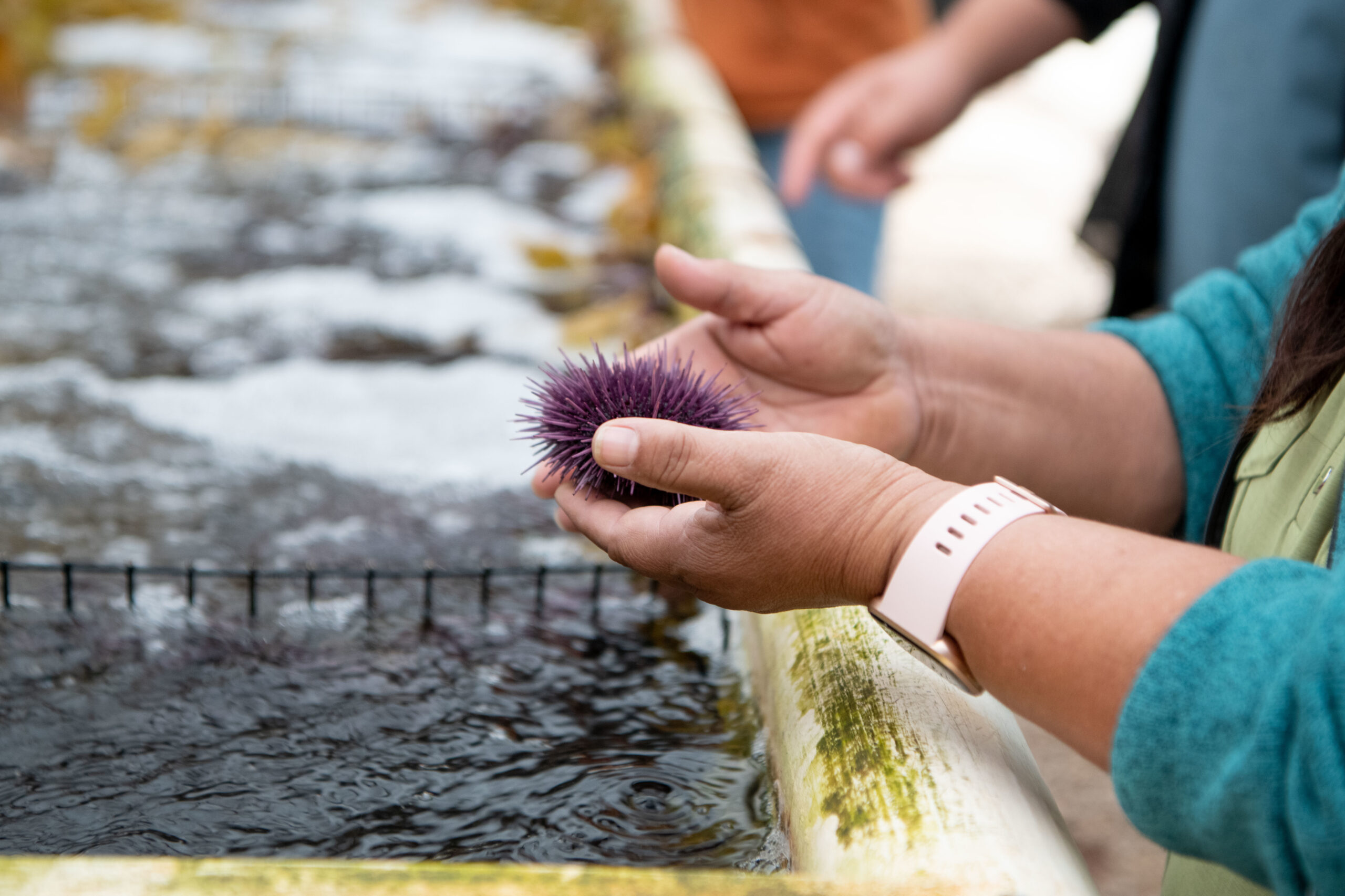 Abalone has been part of our region’s food history for thousands of years. Before the time of commercial fisheries, the Chumash People harvested these gastropods during low tide from the coastal rocks and tide pools. At the time, they were plentiful and provided sweet and nutritious protein and beautiful iridescent shells for making jewelry, fish hooks, bowls, and for trading as currency. In the last few centuries, as human populations increased along the coast, overfishing of all species, including abalone, became an issue. In response, California passed ordinances during the 1990s limiting the harvest of wild abalone – and creating an opportunity for aquaculture to emerge as a sustainable model for continued access to this treasured food source without causing damage to the ecosystem.

Launched in 1989, the Cultured Abalone Farm is a sustainable aquacultureAquaculture: Also known as aquafarming, the farming of fish, crustaceans, mollusks, aquatic plants, algae, and other marine organisms. operation located at the historic Dos Pueblos Ranch about 10 minutes west of Goleta. At the time, there was an influx of abalone farms cropping up along the California coast, cultivating an abundance of this prized delicacy for eaters and top chefs across the globe. Today, however, this farm is one of just three abalone farms still operating on the West Coast. As Hatchery and Production Manager Devin Spencer explains, “Cultivating abalone isn’t easy – raising larvae to market can take four years and can be quite costly since they are sensitive to changes in their environment.” Managing pests, water temperature, and pH, and nutrients is expensive. If something goes wrong along the way, the financial impact and the risk of losing the entire year’s harvest is great.

Spencer and her team raise roughly one million abalone from hatchery to market per year – and have little trouble selling out each harvest. Most of the abalone are sold to chefs and eaters from Los Angeles, but local customers such as Lucky’s, Santa Barbara Shellfish Company, Bibi Ji, Industrial Eats, and Bell’s Los Alamos are also regular customers.

Even with so many abalone, the Farm stays true to sustainable, regenerativeEnvironmental Regeneration: Also known as aquafarming, the farming of fish, crustaceans, mollusks, aquatic plants, algae, and other marine organisms., and low-impact practices. “We are an extension of the ocean, a closed-loop systemClosed-Loop System: As opposed to a linear food system that follows consumption of food from field to plate to waste, a closed-loop food system is a more sustainable model that follows food from field to plate to field with little or no waste.,” said Devin. “We use sustainably harvested local seaweeds and cool, unadulterated water pumped in (and back out) from the Santa Barbara Channel to create a natural ecosystem for the abalone to thrive in.” Kelp regenerates very quickly – growing up to 18 inches per day – providing enough to harvest for the abalone without depleting the resource. Leftover kelp is sent to regional farms and vineyards to provide nutrient-rich supplemental feed for pastured livestock that eventually return those nutrients to the land they graze on.

But sometimes there can be too much of a good thing. In an effort to manage the invasive Purple Hotchis (purple sea urchins), The Cultured Abalone Farm partnered with local commercial urchin divers Harry Liquornik and Stephanie Mutz of Sea Stephanie Fish to create a new market for these tasty yet prolific echinoderms. Because of their great numbers, purple sea urchins often consume all the kelp and algae in their environment, altering many marine ecosystems in their wake. While red urchins are highly sought after for their large size and predictable yield, purple urchins have often been regarded as commercially non-viable – until now. Sea Stephanie Fish and the Cultured Abalone Farm discovered that the purple urchins grew incredibly plump in the Farm’s aquaculture tanks when fed a diet rich in kelp and seaweed for 10-12 weeks. Together, they are helping to manage the purple urchin population, address ecological impacts, and cultivate a new, unique culinary delicacy.

Learn more about Cultured Abalone and read about their Purple Urchin program.

Santa Barbara is one of the few places in the world where sea urchin and abalone can be regularly enjoyed. Purchase Purple Hotchis directly from Sea Stephanie Fish and The Cultured Abalone Farm – or at the local restaurants mentioned above.

SBCFAN Members receive our seasonal member newsletter and occasional alerts about food system resources, opportunities, and advocacy. Membership is free and the only prerequisite is that you be an active participant in the Santa Barbara County food system. If you eat, grow, gather, buy, sell, ship, process, raise, fish, and/or engage with food as it moves from farm to table, we hope you’ll become an SBCFAN member.

In addition to receiving our email newsletters, the Network provides members with an online “hub” to further connect, align, and activate with other food system “actors” so that together, we can build a more resilient food system.

Become a Member
What Badges Have People Earned?

A Food Action Network for Everyone

A successful Network is a community where everyone can participate, contribute, and benefit from connecting with others. That’s why we are setting a table with space for everyone. We welcome you to grab a seat and join the conversation so that together, we can build a more resilient food system.

That being said, the Santa Barbara County Food Action Network is a work in progress. We have much to learn, including how we can create a hub for our countywide food system that over time will reflect all of you. We are committed to taking a stepped approach to inclusivity, diversity, and accessibility as we develop our language and communications, outreach, and leadership.

Thank you in advance for your patience and understanding while we continue to evolve.

We are designing our website and member portal to be multicultural and multilingual. But we still have a lot of work to do.

As we work toward completely bilingual content, we will use a combination of human and machine translation. We are committed to providing inclusive, diverse, and equitable access – and we thank you in advance for your patience and understanding while we evolve. For now, please pardon our awkward Spanish.